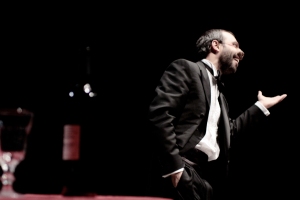 Short synopsis
Funny this monkey that invited to the university tells how he in the past five years has become a perfect european citizen.
Funny? After having been amused by the story of another, not even human, having laughed of the futility, absurdity and the stupid vanity of the monkey
we suddenly understand that it has to do with a brother of ours … with ourselves.

Jean-Paul Denizon
From ‘74 to ’76 he studies at the National Conservatory of Dramatic Art in Paris.
In ‘79 he meets Peter Brook and works with him as actor and assistant director in many plays, such as The Cherry Orchard, Carmen, Mahabharata, The Tempest, taken on world tours (New York, Tokyo, Jerusalem, Rome).
Since 1985 he teaches actors and directors and for the last twenty years he directs his own shows in different countries around the world.